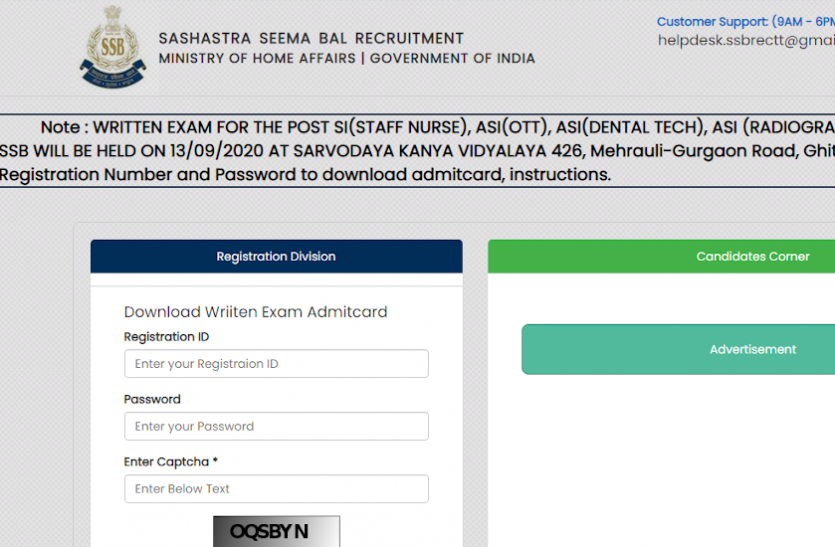 SSB ASI, SI Admit Card 2020: Sashastra Seema Bal (SSB), has released the admit cards for the written examination to be held for the posts of SI and AISai.

SSB ASI, SI Admit Card 2020: Sashastra Seema Bal (SSB), has released the admit cards for the written examination to be held for the posts of SI and AISai. Those candidates who have applied for the posts of SI (Staff Nurse) and ASI (OTT, Dental Technician, Radiographer and Pharmacist) issued by SSB, can submit their admit card official portal to appear in the written examination conducted by the force, You can download it by visiting ssbrectt.gov.in. Also, candidates can also download their hall ticket from the direct link given below.

According to the update released on the official portal of Sashastra Seema Bal, the written examination for recruitment of SI and ASI is to be conducted on 13 September 2020 during the second week of next month. The examination is to be conducted at Sarvodaya Kanya Vidyalaya 426, Mehrauli-Gurgaon Road, Ghitorni, New Delhi – 110030.

There will be 2 papers in the exam

As per SSB SI and ASI Recruitment 2018 notification, the written examination will have two papers of two hours each. Paper 1 will have 100 questions of General Knowledge, Numerical Ability, Quantitative Aptitude, General English / General Hindi and 100 Reasoning of General Reasoning. At the same time, the second paper will have questions related to the subject. Paper 2 will be evaluated only by the candidates who achieve the minimum 50 percent marks prescribed in Paper 1. Even the minimum qualifying marks for Paper 2 is 50%.

Candidates who are declared to have passed the written examination will be invited for the skill test, which will vary according to the application post of the candidates. However, the skill test will be of qualifying nature only.

Candidates should note that the final selection will be done on the basis of marks in the written examination (Paper 1 and Paper 2).